Write With Me: Cotton-Headed Ninny-Muggins, Am I

Write With Me: Cotton-Headed Ninny-Muggins, Am I

One of my favorite lines from the movie Elf got me started with this blog on the connection between bread, skulls and their symbolism.

But what is it all about? What on earth do skulls and death and someone who thinks he is humorous, but lacks brain capacity; a doofus in plain talk, have to do with making bread? Not much--and everything at once.

As far as being a CHNM is concerned, the Urban Dictionary and your own god-given common sense spells it out. When Buddy the Elf says he may as well be called what he is, a CHNM, haven't we all been there? He feels a bit inadequate as an Elf to do his job  - being a good Elf means making a certain quota of etcha-sketches, just like the other Elfs. But the thing is Buddy is not an Elf. He is on the crest of learning who he is.

This is an incredibly important part of story-telling, and it hit me at the gut-most and with the ut-most of importance. I have felt like, identified, and connected with Buddy's inherently classic fish out of water identity. Have you ever felt like you didn't belong, fit in, and according to the general population, a doofus?

Nah, me neither. :)
As far as bread goes, I learned from Peter Reinhart that what I felt about bread, intuited, but as yet, had not articulated was also of a critical nature.
"What makes bread so special is that it is a transformational food."
Ah! Watch this Ted Talks with Peter Reinhart for more of the good stuff about how bread brings us life.
And so its not such a big stretch to also bring death into the conversation (what again? please visit the name of this blog post discussion..) when you're talking about transformation and fitting in.

At one time I was working with a plot thread of the discovery and secret kept by the skull of my protagonists murdered mother. Though typically considered a symbol of death at first, the skull also served as a symbol of the mother's divine powers as a healer, and even in death gave my heroine a new life because of the secret it carried. 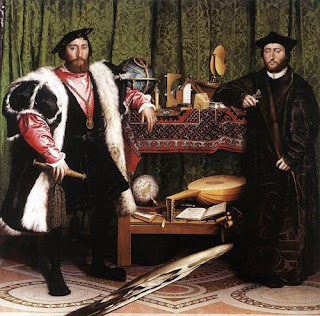 The Spanish Ambassadors was painted in the Spring of 1533

Hans Holbein's painting of the Spanish Ambassadors, hangs in the National Gallery, London. The skull is the strange oblong shape on the floor. The distorted form is called an anamorphosis. Seen from a certain angle, the shape is recognizable as a skull. The painting was made for a specific place; it was supposed to hang over a door. When you passed under it, you were forced to look at the painting from a sharp angle, and then the skull would appear as a memento mori; a reminder - usually of an artistic nature that in Latin means, "Remember your mortality."

As it turns out, I also learned a surprising fact about a town in the Provence hills The French village of Eze has a motto; "Moriendo Renascor" (meaning "In death I am Reborn") and the city emblem is a phoenix perched on a bone.

Sometimes, the connections are hidden in plain sight. Don't you just love it when that happens?

Tell me--has a memento mori ever been important to your creative soul?