Cook With Me: Why I Must (Never) Leave Chinese Food. And Old Shanghai.

Cook With Me: Why I Must (Never) Leave Chinese Food. And Old Shanghai.

New Years Day 2015, and lo and behold.... I've got food on my mind. Before the holidays ~ and their soft silky glow ~ leave us, may I ask you a personal question: have you fallen head over heels for a food? Group of foods? Is it "your heritage" food? What calls you? Do you celebrate with different foods than your birth family?


Wait though, group of foods, that’s so not the phrase I’m looking for. Nope, that's not the ambiance at all. But don't let the lack of that detail prevent you from heading in to this exploration, we'll figure it out together, I promise.

Whenever I was missing my two sons, who had grown up and were happily going about doing their thing, I would go out for Chinese food. You guessed it. I admit it. And it got bad.

After umpteen fat and crispy eggrolls dipped in duck sauce and hot mustard, platters of Vietnamese cha gio cushioned by green leaf lettuce and bean sprouts, slippery bowls of hot and sour soup that sting your winter weary throat, egg  foo young – sitting quiet and simple on the plate waiting for your chopsticks, spicy peanut noodles, and deep cavernous bowls of pho topped with a sea of cilantro and basil and mint life-rafts, I came to the screaming decision that whatever it was about this plethora of plumpness (not mine...hey!) I had to control my addiction by doing the only sane thing. Abandon ship and go cold turkey (not with szechuan spices..or sticky rice, please, oh god, can't we have just a little!) without Chinese food. I beg your temporal and temporary collusion on calling all of this Chinese food..it’s not, I know. I was literally beside myself with conviction. I would be steadfast. Wasn't it ok to want to recreate the tables of the past? That sounded suspiciously like backsliding and rationalizing, and so I did what any other person would do. I sternly took myself by the hand.
I held fast. I broke a few dozen chopsticks over my knee. I threw away the "to go" packets of chinese mustard. I stomped and sobbed and lobbed bamboo steamer baskets into the woods. I would not succumb. I emptied jars of plum sauce into the compost pile, annointing them with salty tears. Rice noodles got sent up, and down the creek without a rice paddle. I burned all my fortunes. Well, now.. no. I couldn't bring myself to that, I am reasonable after all.

After I calmed down, I took a cold hard look at the enemy, Eggrolls Past, and how this came to me. To be me.

I rolled the camera back. Chinese food was as foreign a food as a food could be when I was growing up in Reading, Pa. There I was surrounded by Liver Pudding, Schnitz and Ep, Bot Boi, AP Cakes, and ...lots of Germanish dishes. Was Chinese around when you were growing up? It was a lot like 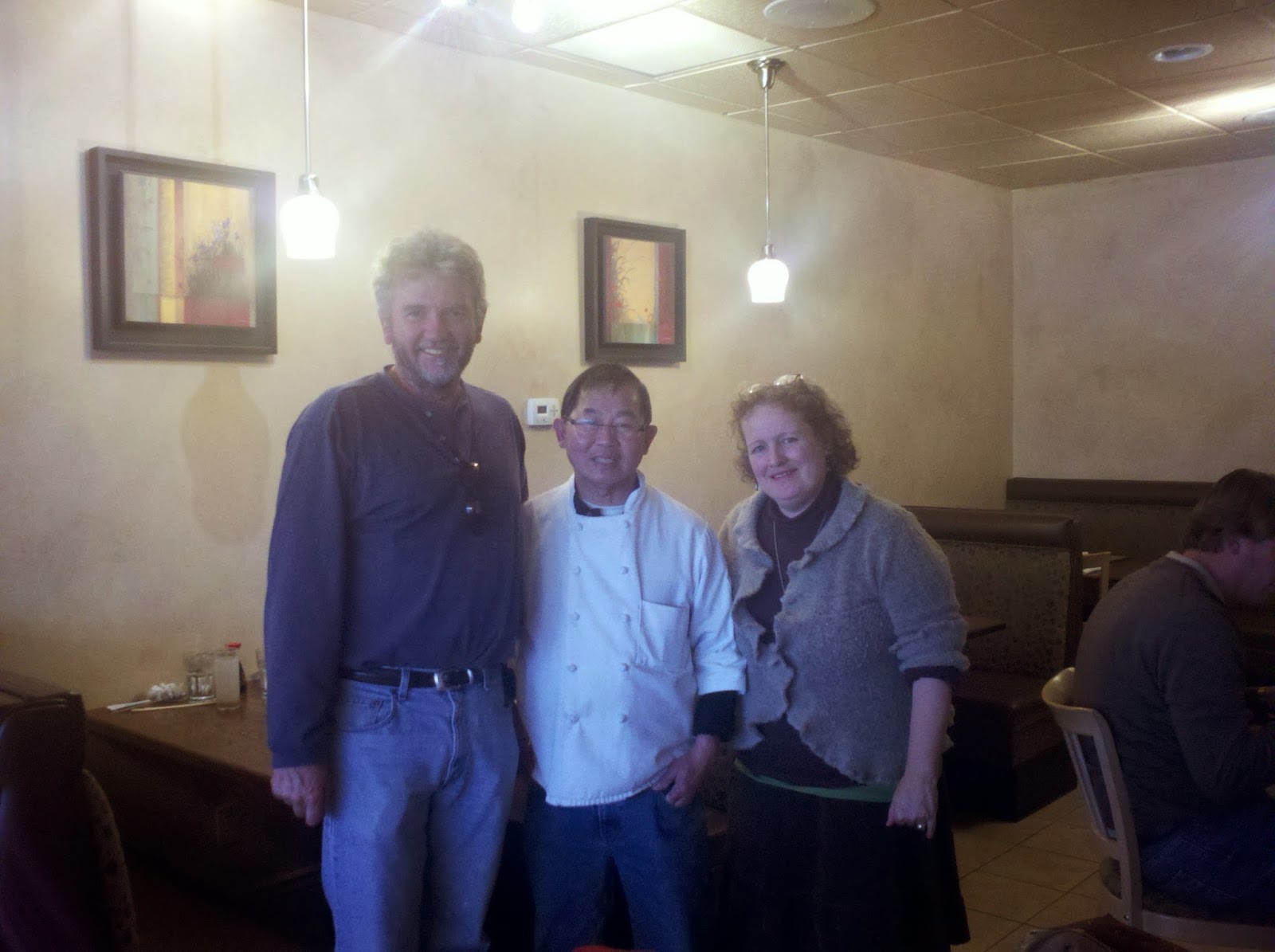 Owner, Dang Truong, with us at his new place, Lemongrass Bistro
Both my sons grew up amidst a backdrop of Chinese and myriad of Asian food ~ along with French and Italian and Mexican and Southern with a little Shoofly Pie and Sticky Buns thrown in for good measure. But am I sorry to say that Pennsylvania Dutch food didn't maintain it's place in my heart as it did when I was little? Sure. I wanted to have what I thought others always had, a family food. So why was I so fast to discard what was given so freely to me? Did it feel like it didn't really belong to me? I hope I was grateful. I felt grateful, especially to Nana. But maybe I never said a word. Maybe she understood as we sat at the table joined by eating our bowls of chicken corn soup? And what would she say about all this Chinese food?

If I had been enamored of say, always making pork and sauerkraut on New Year's Day as Pa Dutch tradition demands, wouldn't I be denying the food and the people where I was living? I had changed.

After I left Pa. I celebrated and searched and shared a multitude of yummy ways of looking at the world. I didn't worry about what I had left. I quite possibly was consumed with I for I was young.

For me and for us, Chinese food came to mean family, and celebrations, and spending time together with our sons. We had moved away, and embraced a new life. The nights we got take out Chinese were a delicious "wok" of WE. And by we I mean all of us, everywhere. I believe eggrolls and dumplings helped us celebrate being as different and perhaps pilgramatic, as say Chinese food on Christmas.
My sons grew up to celebrate, gulp, the same things -- the reasons they flew the coop were not the same as when we had, right? To test out their wings and find new...family! In fact they return to the coop. And we to theirs. Gosh, were they living what we had, in fact, done? And taught them? How did this happen?

Colorado is where my oldest son, Erick, returned, and is the executive sushi chef at Sato in Edwards. Kayla, his girlfriend works there too, and has the most amazing and descriptive palate and aspires to new adventures of her own. Their world is chock a block and blazes full of snow storms, fish and rice  (not usually fried) and kombu.

My youngest son, Jaryd, is entrenched in the LA world at Dreamworks where he works on dragons and cavemen during the day. Ana, his girlfriend is studying urban planning and public health at UCLA and together they love sharing Nicaraguan, Brazilian, Ethiopian, and Houses where Dumplings number in the hundreds for choosing at will.
As I may have said, have I OVEREMPHASIZED THIS POINT? both of my sons are grown up now and off in the world doing their delightful thing, as I did. They may be gone, but I realized they are not far away. How I wish I could thank Nana, talk to her. Let her know that even as I moved away, I held her close and cherished all the times in her kitchen, what she showed me. What she told me about life through the stove, and the stirring.

And what would I be showing my sons if I stopped eating Chinese food? The very epitome of what we shared and cherished. What made me lift the ban on Bahn Mie or Pork Steamed Buns, was the same thing that led me to abolish it, celebration. Suddenly bowls of Pho that once seemed so full, and yet so empty, swirled and were swilled. This holiday season we had a wonderful wonderful time with both Jaryd and his girlfriend Ana and with Erick and his girlfriend Kayla as we made cha gio (and other things too) in the kitchen. Was it sharing this ritual with their special someone's that made things OK? Perhaps it was. It definitely was! Is there change afoot? In buckets!! Am I a Drama Mama? I am perhaps, but count me ready.

So, full circle back to the beginning. What makes you fall so foolishly for a group of foods?
Aha, Group, is definitely not the right word; but maybe, just maybe, Family, is. 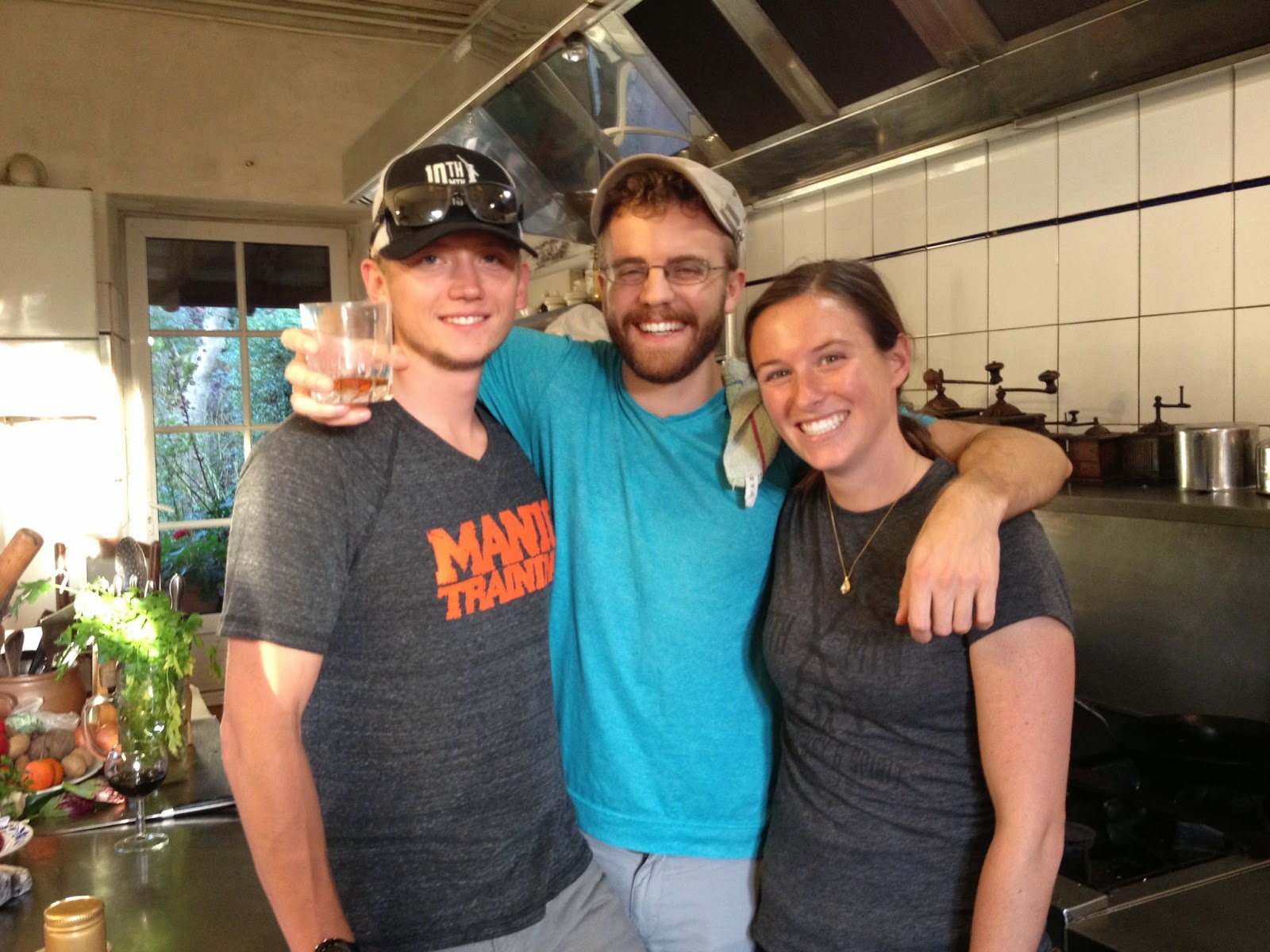 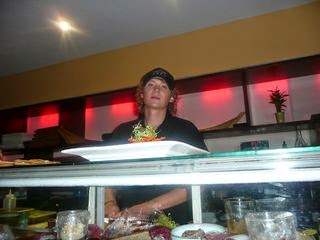 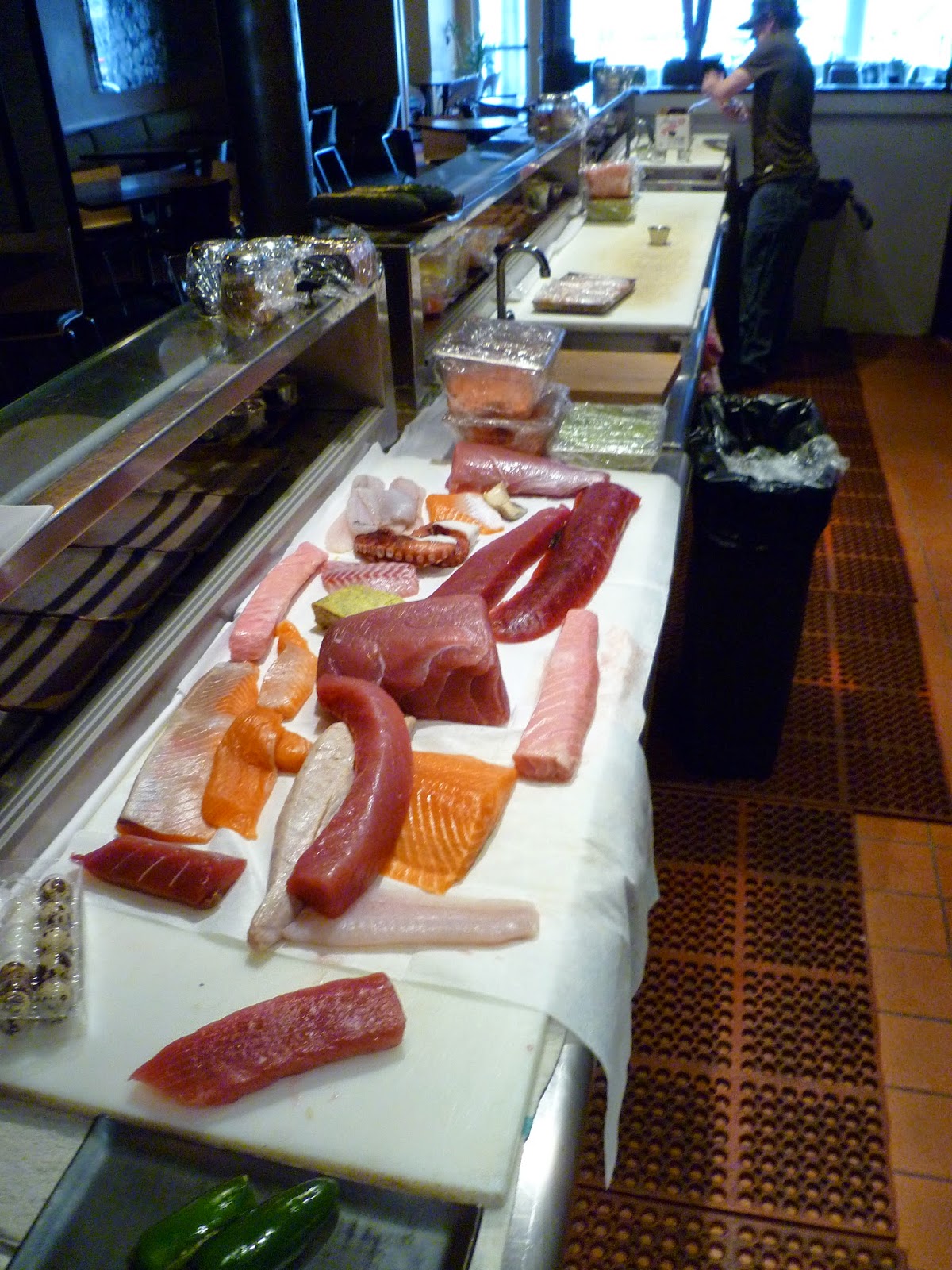 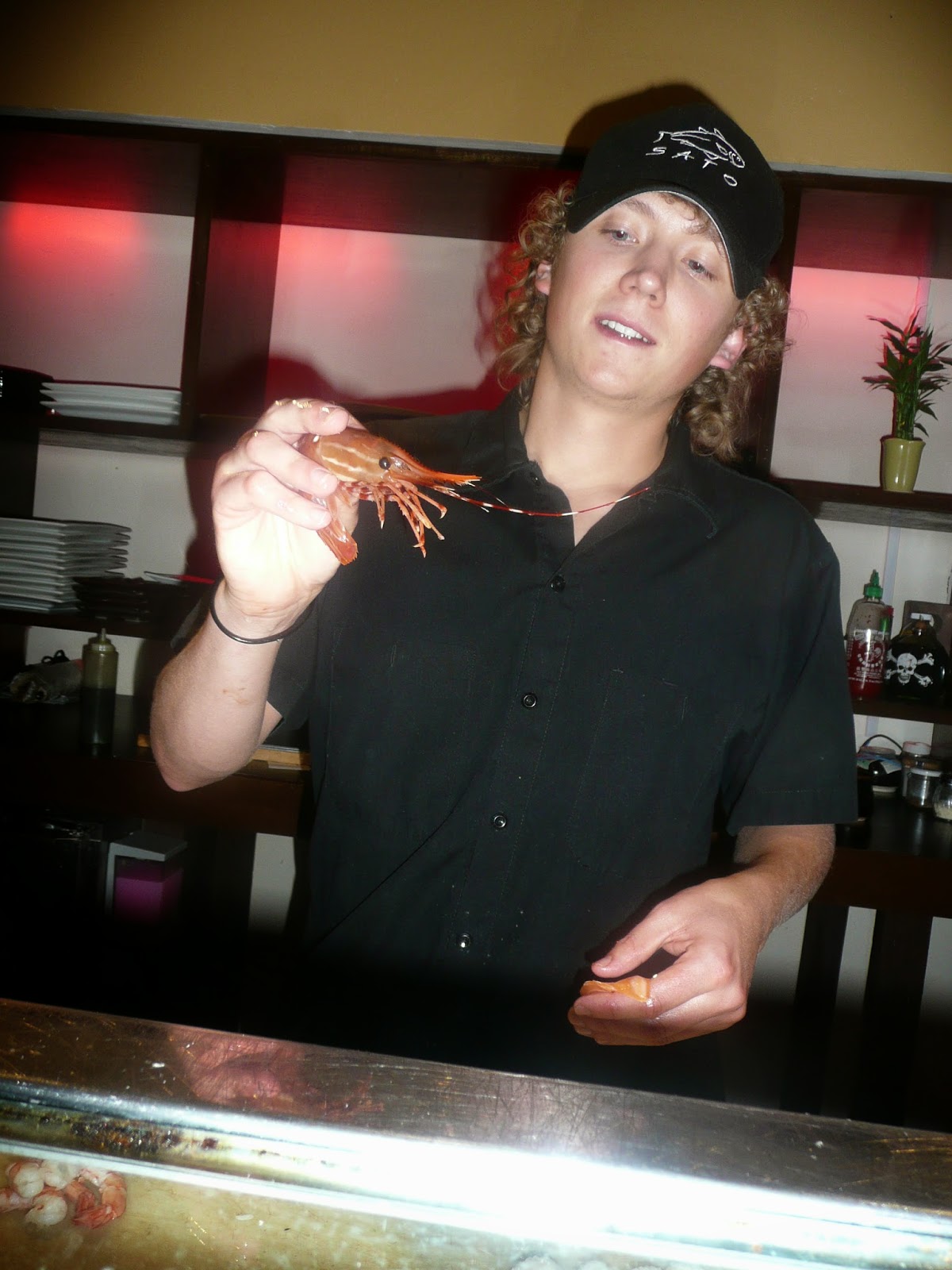 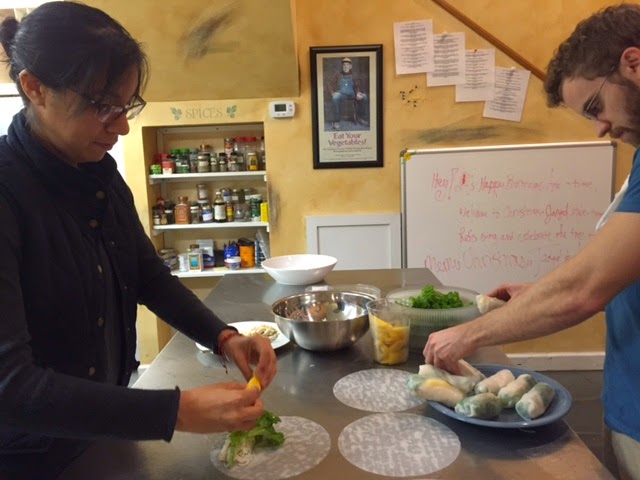 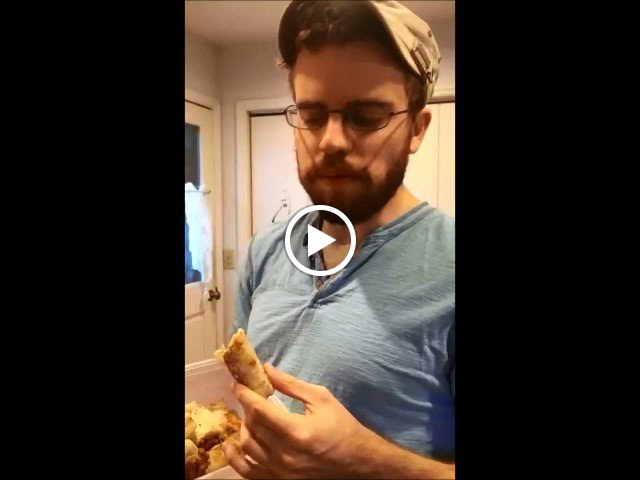 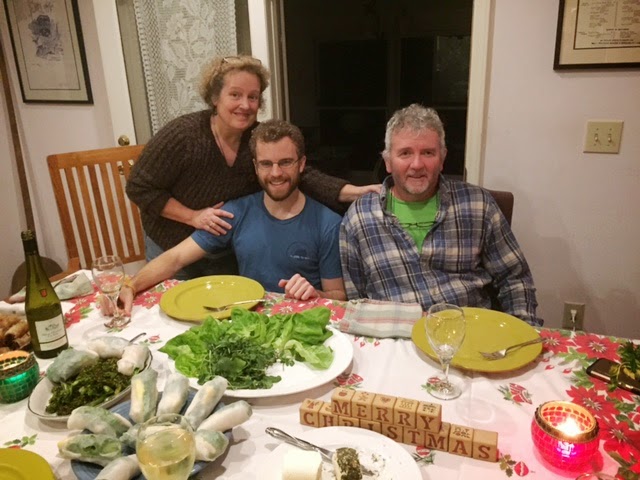 Christmas Eve with Ana and Jaryd 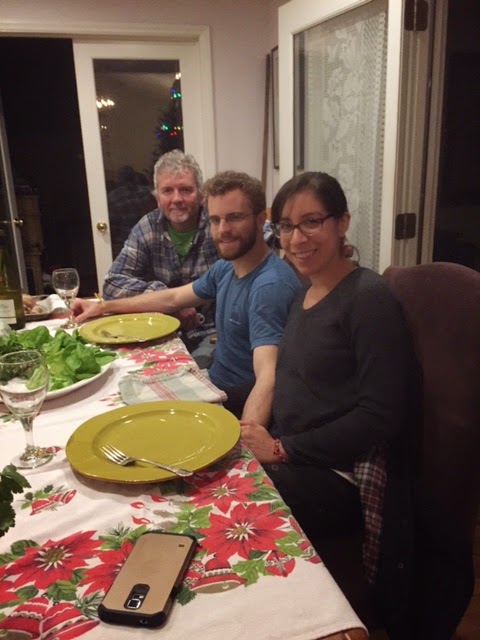 Christmas Eve with Ana and Jaryd

cha gio, vietnamese spring rolls
our family loves these spring rolls so much that when we moved from colorado springs, where we became addicted to them, we began to prepare them for our christmas eve repasts.
the fish sauce:
2 small garlic cloves, crushed
1 small fresh red chili pepper, seeded and minced
2 tablespoons honey or gosh and gasp, raw sugar
2 tablespoons fresh lemon or lime juice (lime preferred)
1/4 cup rice vinegar
1/4 cup nuoc mam (vietnamese fish sauce)
the accompaniments:
1 shredded cucumber and 1 shredded carrot
1-2 cups bean sprouts
fresh mint, basil, and cilantro
the filling:
2 trimmed scallions
2 carrots, peeled and trimmed
4 garlic cloves
1 pound ground pork
1/2 pound raw shrimp, peeled
1 teaspoon black pepper
1 tablespoon nuoc mam (fish sauce)
1 egg
assembling and frying:
1/2 cup sugar
30 rounds of rice paper, 6 1/2 inches in diameter
prepare the filling:
using the work bowl of a food processor fitted with a steel knife, process the lemon grass, carrots, garlic, and scallions until finely chopped.  add the raw shrimp, ground pork, black pepper, fish sauce, and the egg and process until well blended.
assemble the rolls:
fill a mixing bowl with warm water in which you’ve dissolved the 1/2 cup sugar. handle the rice paper with care as they can be brittle. sweetening the water helps the rolls turn a golden brown when fried.
one at a time immerse the sheet in the warm water and remove it to a clean countertop. continue in this fashion, dipping and laying out the moistened rice paper till you have about a dozen. place about a tablespoon of filling in the bottom third of the rice paper. fold up from the bottom, the rice paper can be quite sticky and stretchy, resilient even. fold over and cover up the filling, and shape into a log. then fold in the two sides and roll up burrito fashion being sure to completely enclose the filling. it is very important to roll them tight so they won’t break open during the frying. if one should tear, double roll it, by moistening another rice paper and enclosing the torn eggroll in that. continue until all the filling is used.
for the fish sauce:
in a medium bowl, combine the chile, sugar, vinegar, fish sauce, lime juice and garlic. stir to blend. set the sauce aside.
for the accompaniments:
wash the lettuce and leave the herbs whole, placing on the same platter as the lettuces. refrigerate till ready to eat.
fry the rolls:
if possible fry in 2 woks or deep pots. pour 3 to 4 inches of oil into each skillet and heat to 400 degrees. working in batches, add some of the rolls to each skillet, but do not crowd or let them touch, or they will stick together. fry for 5-6 minutes, turning often, until golden and crisp. remove the rolls with a bamboo skimmer and drain on paper towels. keep warm in a low oven while frying the remaining rolls.
serve with the fish sauce and suggested accompaniments.