Cook With Me: Nothing Ventured, Nothing Grained. Freekeh

Cook With Me: Nothing Ventured, Nothing Grained. Freekeh

Cook With Me: Nothing Ventured, Nothing Grained. Freekeh
Posted:
May 12, 2015

I started off the morning thinking that before I worked on Chapter 23 of Psomi, I would write a simple and wonderful (and quick) post to share the freekeh dish we made at our wood-fired class last Friday, but with each phone call the fable-like adventure grew, to finally involve Dan Barber, Chef and Author of the James Beard Award Winning Book, The Third Plate, and picking up a 25 pound of freekeh at Stone Barns in NY this weekend.

Yes, this little one pound bag of freekeh started it all. 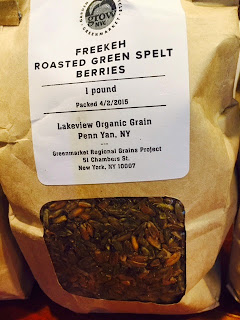 I carried the bag home from our recent trip to NYC and our special day with Jeremy Salamon which began at the Union Square Greenmarket. Then, I halted in my tracks to see the GrowNYC table and all their offerings. It was like the mother-lode to me as I am working on a novel about ancient grains, France, and the Fertile Crescent to name a few of the plot points. But though the excitment stayed wit hme and the little bag, it wasn't until after the class and writing this post, that I learned even more about the chain of hands involved in getting the freekeh to our little table in North Carolina that I want to shake and thank, all of the hands. 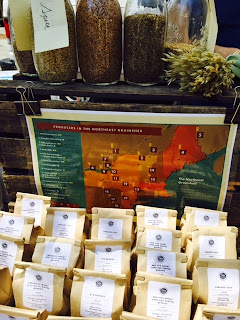 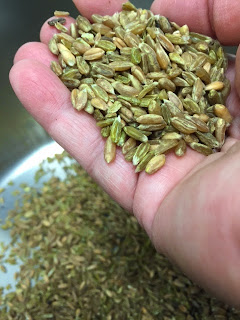 I went back to the GrowNYC page and the Greenmarket page where I bought the freekeh.There the freekeh was listed as a product under Champlain Valley Milling in upstate NY.

I called Champlain Valley Milling, and forgot in my excitement to tell them I was in North Carolina..and though they were kind and generous enough about my lack of logic, they still insisted I could not order any from them and suggested politely that I call the Grow NYC folks, and the Regional Grains Project folks. Good-bye and good luck.

While I wiped my tears away, I uploaded the photos, and saw (barley) that actually the freekeh, was green spelt, and it came from Lakeview Organic Grain in Penn Yan, NY.

Thank you, Mary-Howell Maartens, who is the go-to Mama at Lakeview. With her husband Klaas, they have been producing freekeh for the last seven years. I also learned that freekeh is more of a method for processing grains (sometimes wheat, but not always) when they are still immature and at the milk stage. In this case, their spelt is harvested and roasted in a soy-bean roaster at 360 degrees farhenheit, and then is "steeped" in that smokiness for 24 hours in a truck, and then dehulled. What I had bought was from the 2014 harvest, and the next harvest making of freekeh would be in July. We spoke about Dan Barber, and I mentioned that my husband - and I - were so excited after watching the Netflix Chef's Table episode that he thought he might stop by Stone Barns on his foray from Pennsylvania where he was right now.

Still persistent and wondering if  I could find any distributors here, Mary-Howell suggested I call Regional Access a food distributor out of a place called Trumansburg, NY. She advised me to reach out to Dana Stafford who, as I learned on their website,  just happens to be the President. Instead I ended up on extension #32 and spoke with Jane. She asked if I wanted to order a 25 pound bag and have my husband pick it up at Stone Barns, thus avoiding the shipping..charge.

I laughed and said, sure. Nothing Ventured, Nothing Grained.

Now I just have to tell Rich.

So, here's the recipe and anyone want some Freekeh? 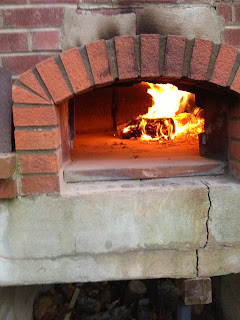 freekeh tabbouleh
the traditional lebanese salad of tabbouleh uses bulghur wheat, a cracked mature wheat, but we made this with freekeh, a roasted green wheat, or actually spelt in this case! incredible!
1 pound freekeh, from Lakeview Organic Grain
water, salt, cracked black pepper
1 cup extra virgin olive oil
1 tablespoon Dijon mustard
½ cup white wine vinegar
handful each of fresh dill and parsley, washed and chopped
salt and cracked black pepper to taste
cook the freekeh as you would rice. Add water till it measures one finger joint above the surface of the grain. Bring to a boil and then cover and reduce to a simmer, for 20 minutes, checking then for doneness. It should still be a little chewy, but tender enough.
drain the freekeh into a large bowl, and pour over the vinaigrette.

add the fresh herbs and mix thoroughly, taste and adjust with salt and pepper. cover the bowl and refrigerate for at least 2 hours.